SOYBEAN PROTEIN IS an important seed quality component and export determinant. This importance stems from its nutritional value for both humans in the form of food-grade soybeans and livestock in the form of soybean meal. Most soybeans in Manitoba are grown for crush markets, meaning meal is the intended end-use and oil is a by-product. Soybean protein content has been on the minds of exporters for several years now and more recently, on the minds of farmers, as one trait that could be improved upon.

WHY THE NEED FOR PROTEIN IMPROVEMENT?

These issues impose the risk of a potential price discount on northern-grown soybeans and reduced prospects for establishing a soybean crush facility in Manitoba. In addition, there is no price premium for high protein soybeans. The protein basis for commodity soybean export to China is currently 34% at 13% seed moisture (39% on a dry weight basis (% d.b.)). As prairie soybeans are now being shipped to the west coast and blended at western collection points, there is a greater risk of shipment rejection, which occurs at 33% (38% d.b.). Food-type soybeans must meet an export basis of 42% protein at 13% moisture (48% d.b.). However, conventional soybeans generally produce greater protein levels than those designated for crush markets.

To learn more about the underlying causes of low protein in soybeans and to find a way to increase levels in northern growing regions, we must look at the impact of environment, genetics and management.

The environment in which soybeans are grown may have the strongest influence on protein. According to the Canadian Grain Commission (CGC) voluntary sampling program, soybean protein levels are lower in western versus eastern Canada (Figure 2). In 2017, soybean protein levels were 36.1% to 37.4% d.b. in Manitoba and Saskatchewan, and 39.4% to 40.3% d.b. in Ontario and Quebec, respectively. Western Canada also produces lower soybean protein than the United States, although northern states are also dealing with low crude protein relative to more southern regions of North America. When we look at the 10-year average crude protein levels across a proportion of the U.S., the decline toward northwestern and northcentral regions is apparent (Figure 1).

Here we are talking about diverse geographies, in which environmental conditions are inherently different. The most notable difference between regions is perhaps growing season length. The overall process of protein formation in soybeans is less understood than in crops such as wheat. But it is understood that soybean plants need time to allocate energy and resources into protein synthesis. And there is less time for this during short growing seasons within northern regions. 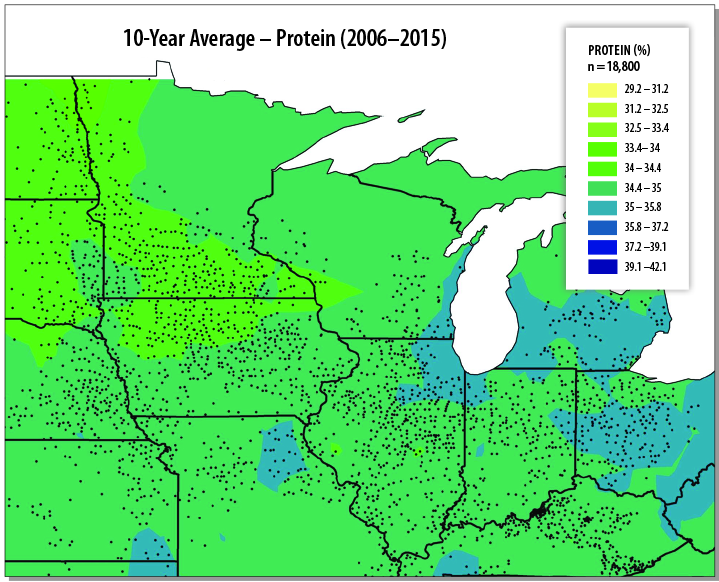 Figure 1. Average soybean crude protein levels (at 13% seed moisture) across the U.S. Midwest from 2006 to 2015. Source: University of Minnesota Extension.

The next factor is genetics, which can also strongly influence soybean protein. This decline in soybean protein levels across North America over time is most likely due to genetics. In addition to the inverse relationship between soybean oil and protein, where one increases as the other decreases, there exists another inverse relationship between soybean yield and protein. Therefore, the demand for selection of higher-yielding soybean varieties has likely caused a decline in protein over time.

Utilizing genetics to now improve protein levels is a long-term solution that will take time, resources and collaboration. Especially since stakeholders do not want to sacrifice yield or early maturation for higher protein in northern growing regions.

Each year, protein, oil and seed size data is collected from multi-location variety evaluation trials funded by Manitoba Pulse & Soybean Growers (MPSG). Presently, this data can be used to make comparisons between locations and years. In the near-future, meaningful comparisons can be made between varieties. Raw data is available at seedmb.ca/webexclusives/.

A study conducted by Dr. Malcolm Morrison at Agriculture and Agri-Food Canada (AAFC) Ottawa examined yield and seed-quality characteristics of food-grade soybeans. This MPSG-funded research determined that conventional beans often had protein levels greater than 40% , but protein rarely exceeded the 42% d.b. target for export. This research also found protein differences between varieties, suggesting that it is possible to improve protein through plant breeding efforts. More information on this recently-wrapped up project can be found in Pulse Beat: The Science Edition Issue 2.

Finally, can farmers manage their soybean crops to increase protein? Most field research studies collect seed quality data in addition to field measurements. And there are a few projects that have recently wrapped up in Manitoba to draw information from.

The first management tool that may come to mind is fertilization. Since nitrogen (N) is a major building block of protein, will N-fertilization improve soybean protein levels? One study led by Dr. Yvonne Lawley at the University of Manitoba (U of M) examining N-fertilization of soybeans found no difference in both yield and protein levels between treatments that had 0, 15, 30, 45, 60 and 70 lbs N/ac applied. As soybeans are legumes capable of fixing N from the atmosphere, will improved N-fixation increase protein? A study led by MPSG found that inoculation of Bradyrhizobium japonicum increased protein by 4.8% compared to the uninoculated control in fields with no previous history of soybeans. However, inoculation had no effect on protein in fields with a history of soybeans. More information on this project can be found at manitobapulse.ca/research-project/ soybean-inoculant-trial/.

What about other nutrients such as phosphorous (P), potassium (K) and sulphur (S)? A field study led by Dr. Don Flaten (U of M) that examined the effect of P-fertilizer rates and placement on soybeans across Manitoba, reported a lack of both yield and protein response to P. And little is known about the effect of K and S fertilization on soybean protein levels in Manitoba.

Another management tool one might consider is soybean planting date. Will planting earlier buy more time for protein formation? Another study led by Dr. Lawley examined soybean response to a range of planting dates from April 27 to June 16 across four site-years. Planting date did not influence protein levels in this study. However, site year differences were observed, taking us back to the strong environmental effect on protein.

A third management consideration might be soybean variety selection for higher protein – a management tool that comes down to genetics, but one that farmers have some control over. According to MPSG variety evaluation data, there is a great deal of year-to-year and location-to-location variability in average crude protein levels (averaged across all varieties). A preliminary look at a subset of this data, including 10 popular Roundup Ready varieties from the past five years, has shown only minor differences in average crude protein levels between varieties. And these differences may not even be statistically significant (analysis pending). So, we turn back to plant breeding and genetics for a solution.

In conclusion, we do not have all the answers to solve the protein issue and it would be unwise to shift management practices solely for the purpose of increasing protein. But we do have a direction for improvement and it will take time before we have solutions. The first step is gaining a better understanding of how the environmental, genetic and management interaction affects soybean protein. MPSG is collaborating with sister organizations to support this type of research. A new project being led by Dr. Elroy Cober at AAFC Ottawa will look at the G x E interaction and its influence on protein, testing soybean varieties with range of protein levels at sites across western Canada.

THE FUTURE DIRECTION OF SOYBEAN PROTEIN IN THE NORTH

Other regions dealing with low protein, including North Dakota, Minnesota and South Dakota, have been working to redefine soybean meal quality. Their method has been to examine different soybean seed quality indicators, such as sucrose and critical amino acid value (CAAV). The CAAV is the sum of five critical, essential amino acids (AAs) including lysine, threonine, cysteine, tryptophan and methionine, measured as a percent of crude protein. These five AAs are among the first limiting essential amino acids and provide a measure of nutritional completeness. Protein is of course comprised of amino acids, so this is simply a different measure of protein that gives a better indicator of nutrition than crude protein.

Interestingly, this research has identified a geographical gradient opposite to that of crude protein – CAAV increases in the direction of more northcentral and northwestern growing regions (Figure 3). A similar trend can be seen with soybean sucrose levels (Figure 4), which give an indication of metabolizable energy in a diet. Rather than extrapolate these map in our minds, MPSG has invested in this type of research in Manitoba to make our very own conclusions. In the meantime, take note of how crude protein levels are reported. There is a big difference between protein values reported as a dry weight vs. 13% moisture basis, or any other measure.

Figure 3. Average soybean essential amino acid (AA) levels (sum of five AAs, as a % of 18 total AAs) across the U.S. Midwest from 2011 to 2016. Source: University of Minnesota Extension.

Figure 4. Average soybean sucrose levels across the U.S. Midwest from 2011 to 2015. Source: University of Minnesota Extension.

ONE STUDY INITIATED this year by Dr. James House at the University of Manitoba aims to understand soybean protein quantity and quality in Manitoba. Samples from the annual multi-location variety performance trials will be analyzed for key attributes, including moisture, oil content, crude protein and, importantly, amino acids – the building blocks of protein.

All animals require amino acids to support the maintenance and growth of body tissues, and high-quality proteins contain greater proportions of essential amino acids. Focusing more attention on the quality of the protein, by measuring key amino acids, represents a more accurate measure of the value of soy protein.

These results will provide the Manitoba soy industry with the information needed to supply high-quality soy protein and ensure maximal returns for farmers.